The Cars That Go Boom 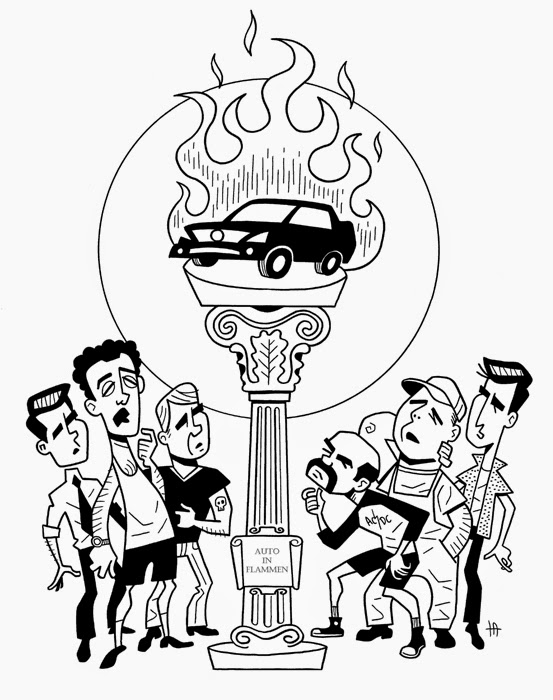 I’ve seen my share of accidents along this dangerous stretch of I-85 in upstate South Carolina. What I wasn’t fortunate enough to witness myself has been conveniently photographed and printed on the front page of the Gaffney Ledger. I’ve seen tractor-trailers overturned, crushing unsuspecting convertibles and sporty hatchbacks. I’ve seen minivans ripped in half by trains. I’ve seen delivery trucks dislodged of their fruit pie deliveries by the sudden appearance of unlucky white-tailed bucks. But I can honestly say this was the first time I’ve seen a car entirely engulfed in flames.
Sure, I’ve seen engines catch fire on occasion – what self-respecting Southerner hasn’t? But a car with huge flames and toxic smoke billowing from the interior, as if disposing of the evidence of a mob hit – this was new to me. Yet there it was, parked on the side of the interstate, blazing in the afternoon sun. As I drove past, I could see no evidence of what caused the fire. An unattended cigar butt? A backseat campfire wienie roast? Richard Pryor? The bewildered driver stood nearby, scratching his head in the familiar manner of someone with a hissing radiator or flattened Goodyear, only this guy had a car full of raging inferno. I reminded myself to check my Geico policy for just such an eventuality.

It’s odd to consider that this is such an unusual occurrence, seeing as the flaming automobile has been a motion picture cliché since Edison rolled his first Model T. TV car chases are likely to end with tumbles into California canyons, and no car flips down the mountain without then bursting into flames (camera zooms in from below on Mannix or Manimal, wincing at the carnage from the cliff above).
Burning autos are such a staple of American entertainment in fact that people in other countries assume this happens on U.S. streets all the time. Granted, citizens of Mumbai and Beirut are too busy fending off car bombs in their own town squares to speculate on how many cars catch fire in the States, but to those living in more tranquil, European utopias, American highway traffic seems like one big monster truck rally. My friends in Germany seem genuinely surprised when I tell them I’ve never witnessed an exploding car, seen a drive-by shooting or jumped a Dodge over a muddy gulch while being pursued by Boss Hogg.
But I assure you, meine Freunde, this was the first burning automobile I’ve seen. And okay, I’m enough of an American male to admit that I thought it was pretty cool. I was relieved to see that the driver was okay, naturally, but mostly I gawked at the smoldering wreckage in slack-jawed gol-dernity. This is genetic, you see. The male of the species is hard-wired to become transfixed by violence. Look, I’m pretty nancy-boy in many respects. I’m the sort who enjoys antiquing and laughing heartily at jokes involving Judy Garland, but even I find myself entranced by big explosions or the promise of someone’s head trauma. I’ll ignore the mind-numbing blather of any given TV set, yet find myself snapping to attention as soon as one Hollywood actor begins punching another one in the face. The only sport I like is boxing, but of course I would happily watch highlight reels of NASCAR crashes for hours.
This is simply the male condition. Set up a construction site along any major thoroughfare and watch every man-type person who walks by instinctively stare at the thundering jackhammers and wrecking balls, secretly hoping for a disastrous mishap of destructive power. Implosions of metropolitan buildings are good; a nice sinkhole would be even better. And of course anything covered in flames makes a man’s heart go pitter pat in a distinctly Cro-Magnon fashion.
When I was a kid, my fire chief father used to come home with stories of catastrophic house fires and exploding oil tanks. It didn’t occur to me or my brother to ask, “Was anyone hurt?” We wanted to know if anyone took pictures. Once, Dad came home with a slide show of a particularly savage airfield fire, complete with flaming plane wreckage and oil drums being launched into the air from the heat’s intensity. It was the greatest day of our lives.
And it was clear that this poor motorist with the burning car, though shocked into sobriety by his near-death experience, was also transfixed by the sight of his melting Volvo. He was grateful to be alive – likely in need of fresh underwear - but being a male, he could not deny that the flames pouring out of his ride looked pretty damn bitchin’. I mean, what does the typical male do when he wants his hot rod to look extra boss? He paints flames on it, of course!
But I don’t want to belittle the guy’s tragedy. Besides the fact that the car could have been his flaming deathtrap, the unfortunate soul had to watch a beloved family vehicle disappear into a column of volcanic fury. All those dutiful car payments wasted. All that loose change in the ashtray useless. Perfectly good Kool Moe Dee cassingle in the glove box. One minute his sporty, lime green friend was delivering him faithfully through the Wendy’s drive-thru, the next minute it’s up in smoke.
I’m not really a car guy, but I learned to appreciate the fine details of a classic automobile while constructing plastic model cars as a boy. I’d give painstaking attention to every wiper blade and pinstripe, lovingly recreating the dashboard features and 8-cylinder engines and…
Well, and then I would take them outside and burn them. Sorry, I’m a male. Cars aren’t nearly as cool without fire.

You are probably the weirdest guy I know. We need to hang out more.