"Happiness is the deferred fulfillment of a prehistoric wish. That is why wealth brings so little happiness: money is not an infantile wish." – Sigmund Freud


In the early Seventies, I saw a photograph of Hagar the Horrible cartoonist Dik Browne in Parade Magazine. I knew who Dik Browne was because, even at this young age, I was completely absorbed in the world of comics and determined that cartooning was going to be my future occupation. Browne was photographed at his drawing board, as all cartoonists are, grinding out another series of comic strip panels (or at least pretending to) while beaming at the camera. This already looked like the Good Life to me, sitting on your butt, drawing cartoon junk all day, but there was one detail in the photo that really convinced me that this guy had hit the lotto. Browne had a can of soda by his table. 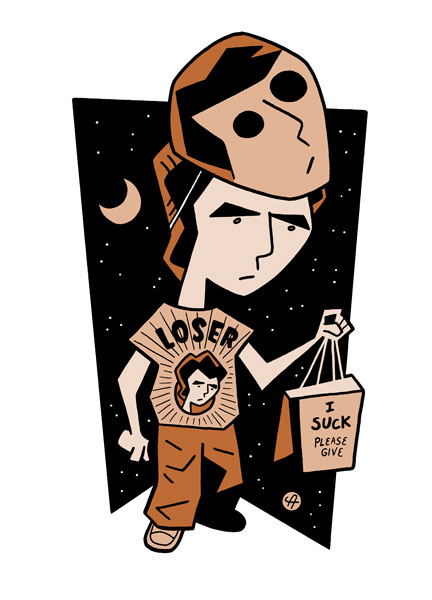 After several decades of consistent failure, I have to conclude that I suck at Halloween. It’s embarrassing. I mean, I pride myself on being a creative type, moderately well-versed in geek culture, and I’m certainly a fan of the holiday and all its paraphernalia. But I’ve never been able to make a worthwhile contribution to the festivities. Even as a kid I usually made a last-minute scramble to throw some reasonable facsimile of a costume together, just enough to qualify for candy collection. Maybe that was the problem – I got the candy anyway. I was rewarded for minimal effort, even though I felt instinctively that I should be trying harder.

The Halloween marketplace certainly made minimal effort easy. In the early years, I’d just snatch one of the Ben Cooper boxed costumes off the shelf at Edward’s department store and that was it. Slip into the plastic poncho (usually sporting the name of the character you’ve selected in neon, traffic-resistant colors), strap on the irritating face mask and you’re ready to roll. But even then I noticed a disparity between the majority of these costume options and the theme of the holiday itself. What did Minnie Mouse and Spider-Man have to do with Halloween? Shouldn’t your Fonzie mask at least include a hatchet in the head to fit the general ambiance of the Witching Hour? It never made sense to me.

But my attempts to go gruesome were pretty half-assed, too. I discovered I could add green food coloring to my mother’s foundation makeup and get a decent Frankenstein shade. I’d slap that on my face, sometimes with some black around the eyes, and then…well, that’s about as far as it went. “Green-Faced Dude.” It resulted in candy, so I kept that up for a couple of years.

But eventually I began getting interested in movie monsters and the makeup techniques of guys like Jack Pierce and Rick Baker and wanted to try something more elaborate (in keeping with my advancing maturity). I bought a fancy kit to make a werewolf face and it turned out to be fairly impressive. The mask was a thin, white, rubber face piece that was pasted over the nose and forehead, with a snarling werewolf snout built into the mold. Your real chin was exposed, so you could talk and growl realistically. The whole face-and-mask combo would be covered in several shades of brown makeup. A little brown on the hands, add a flannel shirt, and viola – man-wolf on the prowl. It looked great.

The trouble was that my neighborhood pals felt they had outgrown Halloween by then, or at least became more interested in the hedonistic vandalism of the holiday than the dress-up part. So I was on my own. And whether or not your costume rocks, it’s no fun to trick or treat by yourself. I had a repeat of that scenario the following year in my even more elaborate Phantom of the Opera getup, feeling the same loneliness that drove the original Phantom into the sewers of Paris. I was getting to the age where Halloween parties should have been preferable to door-to-door begging. Unfortunately, in my neighborhood, a “party” of any sort usually meant smoking a bowl in someone’s garage, not apple bobbing among orange streamers and crepe paper bats. My final Halloween costume consisted of a Superman shirt and full-head Yoda mask, both of which just happened to be lying around in my room. I was just happy no one could tell it was me.

There were a few Halloween party invites in later years. I either resurrected the Green-Faced Dude or ignored it altogether in favor of my preferred Halloween activity, staying home with the lights off (to deter trick or treaters) and watching Karloff and Lugosi movies. Meanwhile, many of my contemporaries continued to get into costume each year – not only at Halloween, but at comic book conventions and Star wars premieres and the like. Through my past failures, I eventually realized I had no taste for getting dolled up in character. After all, those makeup men I admired applied their designs to OTHER people, leaving the potential embarrassment all over the actor’s well-compensated head, while they remained human.

Over the years I’ve known a few people who’ve been employed at theme parks, dressing up like Scooby and Goofy to entertain kids. My first thought on hearing about these gigs was always, “hot and sweaty and humiliating.” What could be the appeal? Invariably, they’d tell me they enjoyed getting “lost in a character,” forgetting themselves and letting the ego dissolve into cartoon stupidity. And this must be the core difference between them and me. Being myself has always been too much of an eternal chore without the added pressure of temporarily becoming Spongebob. Halloween is not a holiday for the self-absorbed.

Unless of course Ben Cooper comes out with an “Ashley Holt” costume just for me. 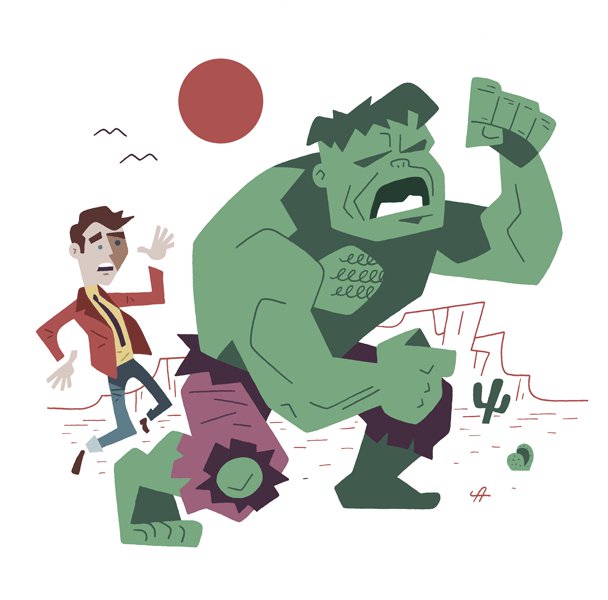 Loitering in my local Barnes-a- Million, I was thumbing through a Marvel Masterworks book, a hardback reprint of early comic books with horrific digital color. Coming across the section featuring Fantastic Four #25, I had one of those electric jolts of repressed memory that I imagine are becoming more common in this age of repackaged nostalgia. I realized that this issue had been the very first time I had seen the Incredible Hulk.

It’s surprising to me now that I even found the idea of LSD appealing. I’ve always been a self-control freak and I was already having major anxiety issues with pot by the time I was in high school. I should’ve been able to predict that acid wasn’t the drug for me, but it took quite a number of pulse pounding, panic-riddled freak-outs to convince me I wanted to stay lucid.


The big mistake was dropping the acid at night, which everyone does in keeping with proper “party” hours. You lose a whole night’s sleep in addition to putting yourself through a chemical drenched meltdown that takes all hours to clear up. The end of my acid ritual in those days was always the same. I’d cocoon myself on the couch with the tv on, trying to create a mundane environment to come down in, keeping myself glued to the tube and resisting the urge to run around in circles.