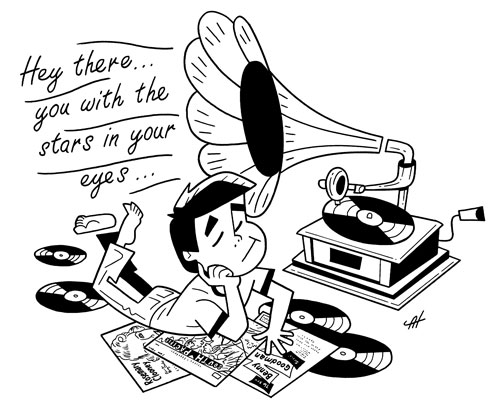 As of this writing, I have reached the age of fifty. Old age is rapidly approaching, like the speeding of a comet destined to wipe out the woolly mammoth, which I suppose in this case is a metaphor for bone density or something. I’m too old to care if I’m writing good.

I find old age suits me, hurtling towards death being a much more relaxing idea than I’d assumed in my hypochondriacal youth. I’m embracing the regularly-scheduled naps and medication doses of senior citizenship, successfully avoiding hard labor, remaining housebound, and keeping expectations of my mental and physical agility low. Occasionally, I take the time to peer at the outside world and scoff at the witless parade of youth culture gumming up the Ethernet. These kids and their iTunes. They don’t know the sheer sonic beauty of Jethro Tull on 8-track, etc., etc. Time for a nap!

Naturally, I have been accused of being a cranky old man since I first voiced an opinion on modern popular culture, which would have been around the age of four (I’d had it up to here with Helen Reddy). I have always projected the air of a world-weary, cantankerous pensioner because, deep in my heart, that’s who I’ve always been. In my desperate hurry to reach maturity, I always longed for a life of quiet routine, to swaddle myself in a contemplative, pedestrian, and thoroughly dull existence, like a patchwork quilt made of Zane Grey novels and C-SPAN.

The signs of premature aging were already there in childhood: a preference for Mike Wallace over Scooby Doo, a fascination with Vaudeville, rejection of Skittles in favor of rhubarb pie. This rejection of all things kiddie continued throughout my snotty teens as I avoided my be-zitted contemporaries, sneering at their pop fashions and rock star worship. I spent my high school years discussing health insurance and lawn mower repair with any adult who might humor me. My girlfriends sat in their rooms alone while I attempted to woo their parents with my obvious maturity, feigning knowledge of surgical procedures and schoolboard referendums. The illusion was shattered when I had to call my mother for a ride home, but I’m sure I looked all grown up in my little fedora.

On becoming an actual grownup, I fled my juvenile peer group to go to college. I packed up my Reader’s Digests and Ben Gay and moved into a crumbling, bug-infested apartment of my very own. It was the first residence in which I lived alone, with no glue-sniffing roommates to scarf my Ovaltine. And it was here, in solitude, away from the chirping Nintendos and Pearl Jam CDs of the other students, that I truly began to realize the extent of my disease.

I tuned my radio to an easy listening station, filling the air with the lilting tones of Mel Torme and Julie London throughout the day. My TV ran classic films almost exclusively, the tedious exploits of Esther Williams and Burgess Meredith soothing my jangled nerves. I began haunting the antique stores, alone, looking for Edison cylinders and Tom Swift first editions. Occasionally I would venture out to the nearby drug store for any required ointments, hot water bottles, or hard candies. Left to my own devices, I instantly became a senior citizen. My diagnosis was not simply introversion in need of quiet or a desire to appear mature beyond my years. It was a full-blown, textbook case of elderitis. I was very happy.

But now, decades later, legitimate old age is finally creeping in. And it’s a relief to finally embrace the old man inside me, like the gays who come out to their friends late in life, even though their Judy Garland obsession tipped everyone off ages ago. It’s a relief to finally be able to say “back in my day” and have those words represent a considerable span of history. The Knievel Age recedes far into the distance, and I find myself the ambassador of a vanished century, a better century. A century without these newfangled Fitbits and Alexas. I can regale the young people with stories of the old country, telling them the legend of Kojak, detailing the day Reagan was shot, or acting out the Thrilla in Manilla blow by blow. The kids will ignore my history lessons and remain fixated on their apps, which is as it should be.

Turning fifty is a relief mostly because the culture at large no longer cares what I think. I am no longer a target demographic for the advertisers enticing the young with their Hollywood features and gaming platforms. No one admonishes me anymore for not knowing what John Wick or K-Pop are. Of course, I don’t know. I’m an old man. The trends of the day fly below my radar, and I no longer have to justify my resentment of them invading my airspace. I can shake my cane at the youth culture with confidence, not as a thrift-store-dwelling hipster in grandpa’s sports coat, but as grandpa himself.

Because that’s the other strange turn of events that has catapulted me into geezerhood. I am now a grandfather. Granted, I’m actually a step-grandfather, or as I like to call myself, Grandpa By Proxy, but grampy nonetheless. This was an ideal development; I skipped having kids myself, then married a woman with grown children who began having children of their own. I flew right past “because I said so” and went straight into “got yer nose.” It feels right. When someone’s calling you grandpa, those aches in the knee joints and lapses of memory don’t feel so out of place.

And so, embracing my inner Methuselah, I settle into an orthopedic chair, fire up the heating pad, and commit my musings to virtual paper. I write for the grandkids, who may one day thumb through a volume of my collected works before tossing it into the Salvation Army bin. My message for them is one of hope for those old before their time: “It doesn’t get better, but it gets older. And that’s better.” I document the inner musings of a Gen X refuge of the pre-digital world, a land of New Wave, New Edition, New Coke, New Kids on the Block, and all the other new things I despised. I’ll reach out to the young people of the future to say what I’ve been saying since I was an old man of twelve. “When I was your age, everyone was exactly as stupid as they are now.”