There seems to be a psychological trifecta in the American holiday season, not unlike the Stages of Grief or the twelves steps of Hollywood networking (aka AA). On Thanksgiving, we show our gratitude for the bounty of hot tubs and elective surgeries we have available to us with a traditional feasting of the gravy-laden. Having properly thanked Papa Jehovah for our gruesome overindulgence, Christmas unleashes a bacchanal of retail consumption for which we may be thankful the following year (especially the eternal blessings of refunds and exchanges). And after all this thankfulness and further greed-a-palooza, we have New Year’s, in which we promise to never, ever do it again.
Read more »
Posted by Ashley Holt at 2:02 AM No comments:

The Music is Reversible, But Time is Not 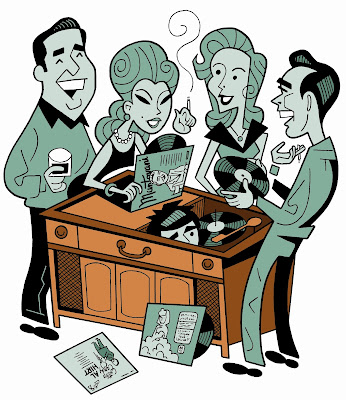 Like so many other podunk dirt farmers of their generation, my newlywed parents were eager to leave behind their rural childhoods of chicken beheadings and outhouse hosings and embrace the dream of 1950’s suburbia. They had visions of two-door Frigidaires, multi-speed cuisinarts and full-color Philcos in a ranch-style Levittown castle. There would be backyard barbecues and baseball practice, birthday piñatas on the patio and late-night cocktail parties with boisterous neighbor couples. This last shindig would require the feature every suburban dweller knew he couldn’t live without: the hi-fi.

Somewhere in 1987, my friend Chuck and I were hanging out in his unfurnished apartment, waiting for that evening’s episode of Webster to begin, when we saw a TV news broadcast profiling “Generation X.” This was a new media buzzword - a label for the upcoming batch of young adults, who were, as usual, completely different in their values and priorities from their parents. Gen X, it was said, was a disillusioned bunch. They had little or no faith in the future, they had an ironic relationship with our corporate-run culture, and they were emotionally unprepared to cope with the struggles of adulthood. Rather than becoming the next wave of innovators, Generation X, they told us, were far more likely to be found watching the Brady Bunch and thumbing through old comic books. Chuck put down his copy of Richie Rich #118 and looked at me sheepishly.
“Where did this ‘Generation X’ stuff come from?” he asked.
Read more »
Posted by Ashley Holt at 4:41 PM 4 comments:

The Agony of the Cleats

As of this writing, the United States soccer team has been eliminated from the 2014 World Cup competition. This leaves the usual futbol suspects like Germany and Brazil to stomp each other’s toes in a quest for glory, and it means Americans can officially go back to not caring about soccer. We can feel relieved about this since, as I understand it, the World Cup matches will continue for at least the next eight months (with additional time added, depending on penalties and injuries) – or maybe it just feels that long.