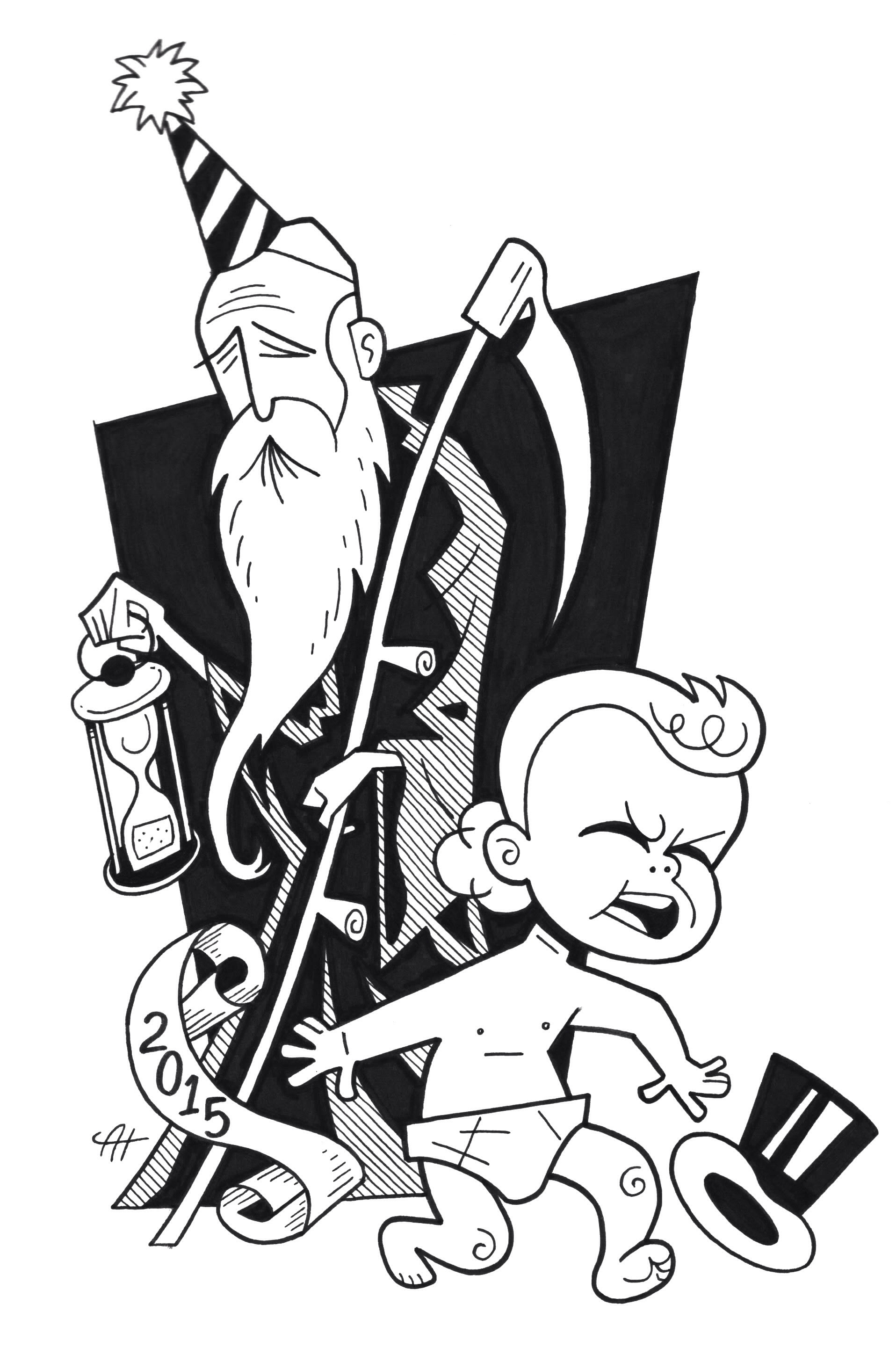 There seems to be a psychological trifecta in the American holiday season, not unlike the Stages of Grief or the twelves steps of Hollywood networking (aka AA). On Thanksgiving, we show our gratitude for the bounty of hot tubs and elective surgeries we have available to us with a traditional feasting of the gravy-laden. Having properly thanked Papa Jehovah for our gruesome overindulgence, Christmas unleashes a bacchanal of retail consumption for which we may be thankful the following year (especially the eternal blessings of refunds and exchanges). And after all this thankfulness and further greed-a-palooza, we have New Year’s, in which we promise to never, ever do it again.


New Year’s is the time when we vow to become superior specimens after January 1st. On New Year’s Eve, we pay homage to the dead celebrities of the previous year, drink to forget our poor career choices, and pledge reinvention into dynamic, brighter, more photogenic versions of our doughy, drunken selves. Personally, I’m rarely engaged in the holiday season. I don’t care for most Thanksgiving menu items, and I’m bored with football and inflatable Bullwinkles. I’m not gluttonous or imaginative enough to really cash in with a decent Christmas wish list. I’m a holiday dud.

But New Year’s works for me because I love New Year’s resolutions. Resolving to improve one’s self with such gusto is akin to the mid-life crisis, and I enjoy a good mid-life crisis several times a day.  I am in a perpetual state of Scarlett O’Hara testaments to the heavens, pledging to derail my destructive ways right after lunch or perhaps after a short nap. I resolve to eat better, exercise, adopt a highway, cuddle the homeless – I run through all the major resolutions every day. In fact, the only resolution I probably couldn’t make would be to make no further resolutions.

New Years resolutions usually involve quitting, and this is where I really shine. One thing I know how to do is quit. I have a black belt in quitting. My personal history is jam-packed with dramatic drop-outs and refusals to finish what I started. I’ve quit school, quit jobs, quit smoking (countless times), quit paying the water bill – you name it, I can quit the hell out of it. The great part about quitting is you get to strut your sanctimonious “will power” simply by NOT doing something. “Look at me! Am I sitting here eating doughnuts and playing Grand Theft Auto 7? No, I am not!” A culture characterized by supreme consumption presents abstinence as a trophy-worthy accomplishment, and on New Year’s, Americans vow to quit everything from Hot Pockets to clown porn, all expecting to be congratulated for simply avoiding something.

All we have to do is classify any and all of these activities as “addictions” and we’re hurled kudos for getting the monkeys off our backs, whether the jones is shopping or shoplifting. Of course, being that we are a people who can’t even do moderation in moderation, quitting itself can become an addiction, as I am the poster child to prove. And since quitting is quite often defined as “doing it while no one is looking,” making resolutions to quit something are pretty hollow gestures. A pledge to actually DO something is a trickier proposition, seeing as people expect tangible results.

Here, my tactic is to set smaller, attainable goals. I believe resolutions to start flossing, lifting the toilet seat, or refilling the ice trays are the best option for drunken New Years promises. Or how about something more general and downright impossible to measure, like “being more positive” or “becoming a more spiritual person?” That kind of fluff certainly won’t leave you embarrassed like a resolution to build a new veranda will.

Sure, I consider making resolutions to invest my money wisely, but this would involve learning how to do something I don’t know how to do, and I generally avoid learning new things. I’m still exhausted from all the stuff I learned when I was young, and it’s clear nothing good came from that knowledge. So, I usually scratch new languages, cooking classes and chainsaw juggling from the list of things I intend to do. Better to pledge to do more of the stuff I already know how to do, like drinking more water and getting plenty of bedrest.

But really, it doesn’t matter what New Year’s resolutions we make. The real point of making the pledge is to feel better about ourselves in the moment. We recognize our failings and, looking forward to a new and unknowable year, we can happily mistake an intention to change for the real effort to do so. We can make resolutions to walk through walls or build a dream home in the 4th Dimension (which is especially unrealistic, given the current real estate market there). What we really want is to feel that this year will be our last as a remarkably lackluster human being. This magical evening will be the last night we suck.

So go ahead. Make whatever resolutions you want. Resolve to speak fluent Klingon, reinvent thermodynamics or marry a unicorn. The important thing is to have goals. Making them a reality? Well, that’s a problem for NEXT year, isn’t it?