Prattle of the Network Stars 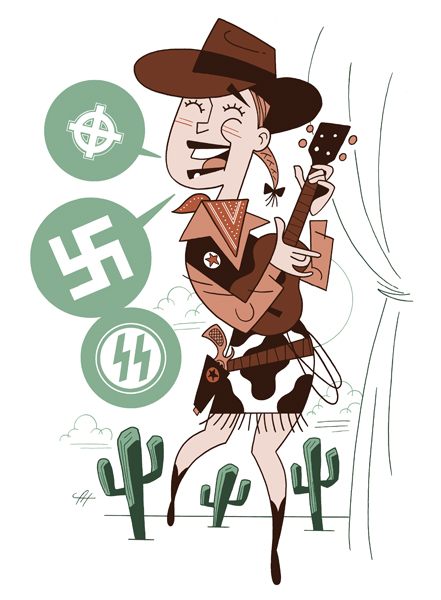 As much as it will pain me, I may have to defriend Kalamity Kate. I know the accepted term on Facebook is “unfriend,” but seeing as the age of texting has abolished the rules of grammar, I feel I should be able to deinvent the language to my own satisfactioning. I also think wine and tubs should be decorked and declogged respectively, in case you were wondering. But I ungress.

Kalamity Kate was the local TV kiddie show host when I was growing up. She was the kindly soul who brought us Woody Woodpecker cartoons and episodes of Ultraman, the woman who conducted my one and only television interview at the age of five (the scandalous tell-all in which I revealed the name of my dog and confessed to enjoying birthday cake). Ms. Kate holds a special place in my heart, and I was thrilled to count her among my social network connections. Unfortunately, Facebook’s sponsored ads have revealed her true colors. The ads pop up without my invitation, announcingmy childhood hero’s various online activities. “Kalamity Kate likes Pol Pot,” the ads will say, or “Kalamity Kate likes Sending Orphans to Death Camps.”(It’s possible I’m misremembering the actual ads.) It’s disconcerting, to say the least, but this revelation about Kate’s personal ideology is something I can’t ignore. Kalamity Kate was the last celebrity I considered sacred, the last mythic entertainment superstar who still seemed to transcend our mortal plain. She gave me bubble gum once. I thought we understood one another.

Uncovering ugly truths about a formerly-loved celebrity is nothing out of the ordinary, of course. We Westerners anticipate the shocking revelation of a movie star’s secret Taliban ties as eagerly as we once championed their fabulous Oscar night gowns or cooed over their newborn triplets (Cody, Venus, and Denim). We often seem disappointed, in fact, if yesterday’s box office draw isn’t tomorrow’s disgraced confession to Oprah. We’re thrilled when our Hollywood royalty turn out to be closet homophobes or Illuminati high priests. We knew all along that demons lurked beneath that cinematic luster.

Long before our modern media empires of spokesmodels and game show hosts, the pattern of worshipping and then violently unthroning Mr. and Mrs. Popularitywas evident throughout civilizations far flung. Heavy is the head which wears the crown, as the peasants soon discover as they kick it down the street. God save the King and all that, until he lets fly with his infamous “how many peasants does it take to delouse the chamber pots” joke one too many times. And even today, as much as we stand in awe of his majesty, we are fully prepared to storm the gates of Steve Urkel’s estate and pummel him with nine irons if and when we deem his Twitter comments offensive. Thus was ever.

Having no television for the past twelve years - a fact I smugly unsheathe under the noses of my TV-oggling peers at every opportunity - I follow the faux pas downfalls of completely alien celebrities through tabloid covers and internet headlines. I see where covertly-obtained phone messages reveal Rian’s misogynistic tirade against Kaitlin. I note that Cassady’s secret BC Powder addiction has driven Bradford too far. Meanwhile, a recent interview gets DJ Skuzzy in hot water when he suggests a public caning for Pumpie and Devlin, stars of the hit show “Third Degree Byrnes,” for their controversial demand to “send all the taxi drivers back to Bulgaria” on a recent episode of “Live with Dingus and The Bear.” Another web link gets me up to speed on Cleveland Rockets Quarterback Troy Gunther, whose apologetic appearance on “The Morning Zoo” did not seem to absolve him of the midget toss scandal, quickly reducing his career to rehab reality shows.

And the best part for me is I got to catch the highlights of all this juicy gossip about bright, young stars without ever having to endure the excruciating hit songs, Orange Bowl spectaculars, or yuk-encrusted sitcoms to which the glossy mugs of these talentless factory products were attached. I dare suggest I experience only the “good parts” of their unwarranted stardom. Because let’s face it, my fellow rummagers of celebrity refuse, all we really care about are the addictions, the on-set meltdowns, and the eventual crack whoredom of these tinsel town twats. We hate celebrities. We hate them worse than our parents and the Teletubbies combined.

Don’t believe me? Then consider practically any retelling of a peon’s encounter with a notable celebrity. It goes like this:

“I met Chuck Woolery at Bi-Lo.

“He was an ASSHOLE!”

Yes, the film star or rock drummer confronted in the real world is an asshole, almost invariably. Donny Most, discovered shopping at Safeway, is an asshole. Mary Kate Olson in the free clinic waiting room is an asshole. The guy who played Screech shampooing your carpets is an asshole. How could it be otherwise? Short of handing every pedestrian a hundred dollar bill or resuscitating choking grandmas, celebritiesencountered outside their natural habitat of awards ceremonies and massage parlors could never hope to overcome the inherit contempt we all hold for them and their undeserved stardom.

And the local celebrities have it even worse, vulnerable as they are attending the same church book burnings and AA meetings as we lesser mortals. These low-calorie weathergirls and morning DJs were flunking Mr. Allred’s Geometry class right along with the rest of us just a few years earlier. What gives them the right to strut and preen on our TV sets while we have to work at Applebee’s? At least our direct access to a guy who lives next door to the local sportscaster’s mother provides ample gossip about the local TV star’s cross-dressing and his glue-addicted children. Anything to take these junior Philbin’s down a peg.

But this was not the case with my beloved Kalamity Kate. Dear Katie, who cheerfully delivered cartoon wonderment and wisecracking puppets every afternoon - how I wanted her to remain pure. I thought surely nothing could tarnish her stardom; no porn theater raid or drunken tirade of holocaust denial to make her seem distastefully human. She was, by all accounts, perfectly lovely in person, as I can attest from my own experience. Alas, she has the voting record of a Klansman, or at the very least, a Koch brother. To me this is akin to discovering Mr. Rogers hung out with the Manson Family, or that Howdy Doody ratted out commies to HUAC (poor Clarabell). I’m going to have to defriend the last untainted celebrity.

A friend recently informed me that old episodes of the Kalamity Kate Show are now available to view on Youtube. But I don’t have the heart to watch, knowing what I now know. In fact, it hurts so much, I may have to leave the computer deplugged.

I feel your pain. Finding out our heroes have feet of clay--or, in some cases, are clay from the nostril hairs down--never ceases to hurt like hell. I saw Harlan Ellison act like an idiot at the Hugo Awards and haven't been able to wipe that image from my mind ever. Even with drugs and alcohol.